This page talks about the formula, intuition and the mechanics of the backpropagation optimization function.

A neural network is composed of several layers of neurons connected to one another. Each neuron is activated when the sum of weights multiplied by the values of the neurons in previous layer is over a threshold when you pass it through a sigmoid / logit function. The threshold is usually 0.5. In order for a neural network to get trained, the weights of all the different neurons need to be adjusted to yield the minimal loss. Backpropagation is the process by which the weights are adjusted during the training process. To understand how this works, we need to understand how to calculate the loss/cost function of a neural network.

Cost function of a neural network¶

The above formula is cost without penalty or regularization. It is similar to the cost of a multiclass logistic regression. In practice, for logistic regression, we compute cost for training data as a whole. In NN, we compute cost for each training sample per by summing the loss over each class, each sample and finally dividing by number of samples.

We penalize a network for the number of hidden layers and the number of nodes in each layer, simple. The penalty is simply the square of weights for each node, summed up and divided by twice the number of training samples. We finally multiply this result by a factor denoted by $\lambda$. Thus

From the course, the cost function is given as below. Notice a slight change in the suffix used for penalty. I changed it for clarity in my formula above. 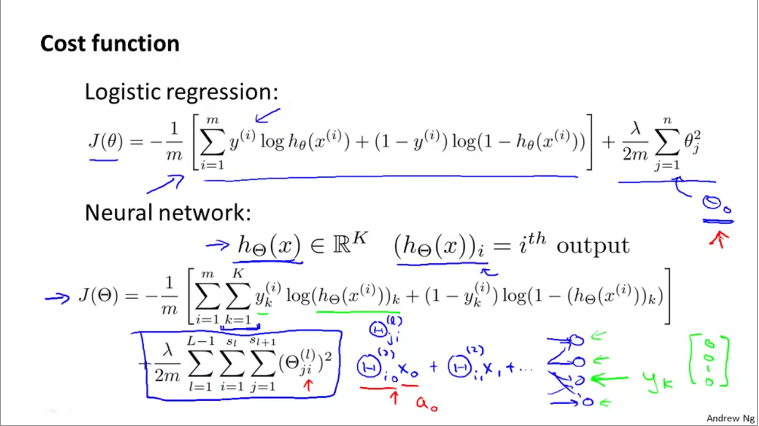 The $\Theta$ (weight) matrix is 2D for each layer. When you stack all layers together, it becomes a 3D matrix.

The cost function gives us a single unit of measure on how well the network performs. The value of the cost function itself is not to be interpreted as such (unlike RMSE or $R^{2}$ which give you an interpretable result). However, you can compare the performance of different hyperparameters or weights by comparing the resulting loss reported by the cost function.

Thus, the objective of backpropagation is to minimize the cost function described above using partial derivatives. For each training sample, we compute an error matrix, which reflects the difference between predicted and output values. It is straightforward to compute the error for the last layer, which is the difference between expected and predicted outputs. Progressively, we compute the error for each of the previous layers.

Let us start by reviewing the steps in forward propagation. The vectorized implementation of it is given in the slide below: 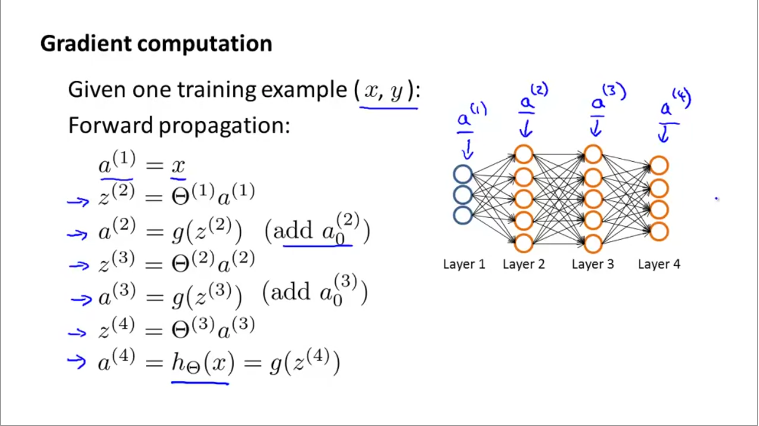 Next, we start by computing the error in the last layer.

The error vector is now simply the difference between the expected and predicted vectors. We can compute the delta terms for the earlier layers of the network as follows: 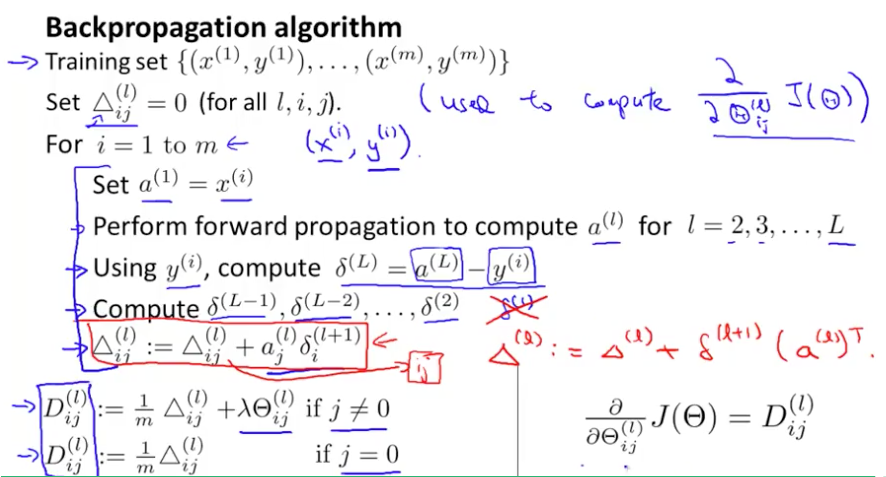 Consider the following example of a simple neural net. 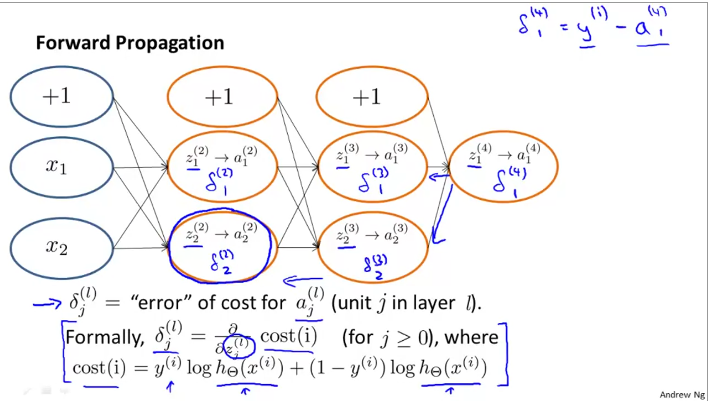 Unrolling: The input layer of a neural network is usually a 1-D array. Thus, when training on image data (which is at a minimum 2D), the images are flattened to a long 1D array (vector), where each row is spliced one after another. This process is called unrolling. The inverse transformation is called rolling which returns the matrix back to its n-D form.

In logistic regression and linear regression, we initialized the weights to 0 and were able to compute the cost and gradients and finally arrive at the best result. However, this is not possible with neural networks. When weights are all 0 (or a constant), then each neuron is essentially identical to the rest. Thus, we need to break this symmetry by initializing the weights randomly.

In practice, a lower and upper bound (denoted as $[-\epsilon_{init}, \epsilon_{init}]$) is chosen and weights are assigned randomly between these values. A rule of thumb for calculating the limits is to base it on the number of units in the network as:

The number of nodes in hidden layers is comparable or (slightly more than) to number of units in input layer.