The core of the cost function is the squared difference between prediction and truth in $y$. In other words, this can be written as

We square the error as that is a common way of measuring loss. We sum the loss for each value of $y$, get the average and then half the average. The squared error cost function is pretty common and works well for linear regressions. We halve the error function for convenience later when we take the derivative of the function and the 2 gets cancelled out. However, the objective of the estimation function is choosing values of $\theta_{0} and \theta_{1}$ such that they minimize the cost function.

To understand how to minimize the cost functions, let us simplify the above regression to a state where intercept is 0. Thus the estimation / hypothesis function changes to

Next, we solve for the cost function for different values of $\theta_{1}$ and plot them in a graph as shown below: 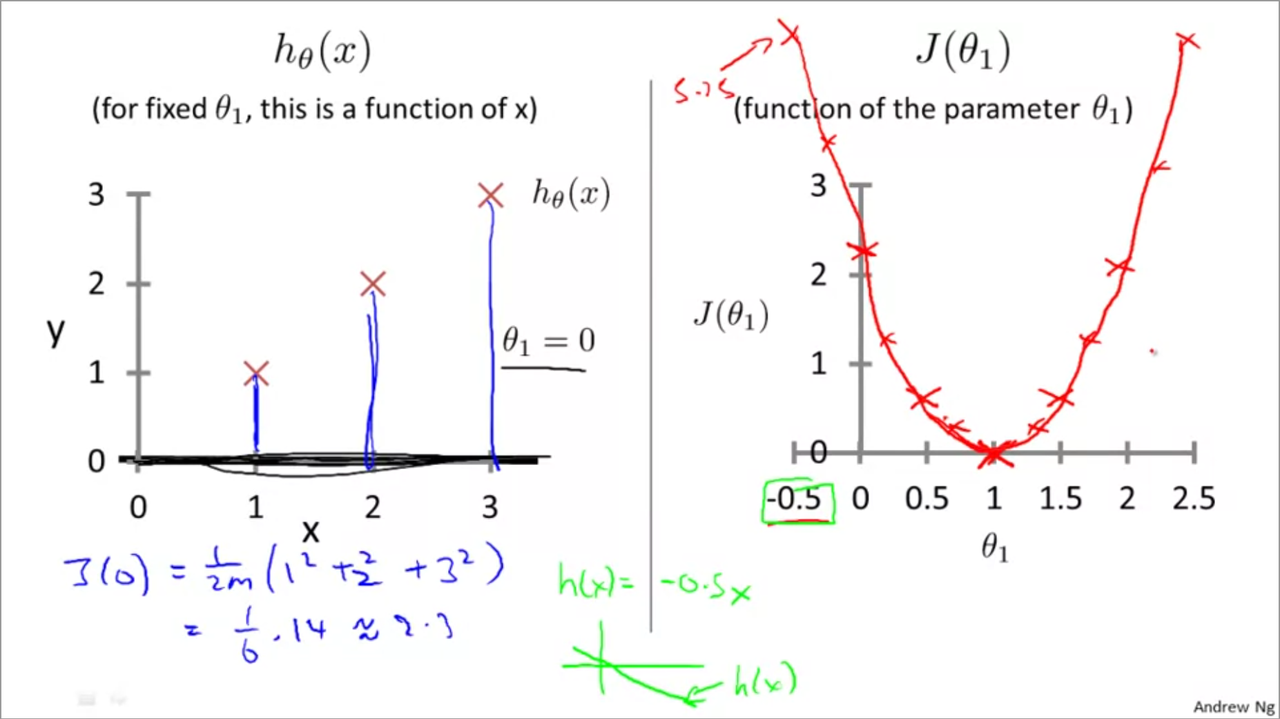 The cost function takes shape of a parabola, with a clear minima.

In the previous example, we assumed $\theta_{0}=0$. If that was not the case, then we need to minimize the residuals / cost function while changing values of both the variables. This leads to a 3D plot as shown below: 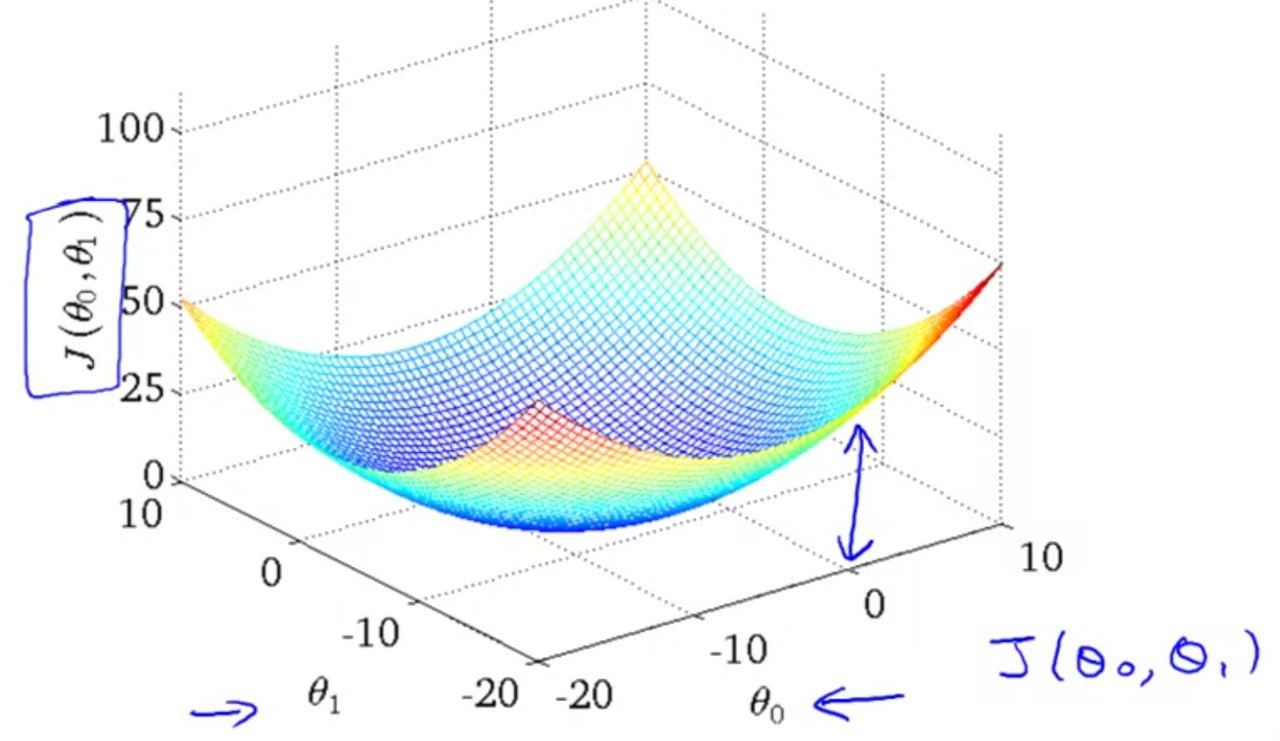 Another way to represent the cost function is via contour plots as shown below:

Points along same contour have same values of error/loss for different values of $\theta_{0}$ and $\theta_{1}$. The objective is to find the lowest point in the contours - which has the lowest error/loss and find its parameters.

Gradient descent is an algorithm that is used to minimize the loss function. It is also used widely in many machine learning problems. The idea is, to start with arbitrary values for $\theta_{0}$ and $\theta_{1}$, keep changing them little by little until we reach minimal values for the loss function $J(\theta_{0}, \theta_{1})$.

The following graphic shows the distribution of the loss function. The GD algorithm starts at an arbitrary point for $\theta_{0}$ and $\theta_{1}$, takes small steps, at each step determining the direction of travel and stride length, and arrives as the local minima. The direction is determined by getting the slope of the tangent (derivative) at each point. 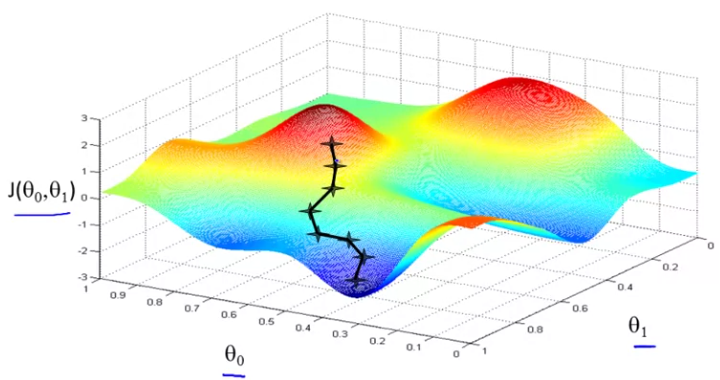 An interesting feature of GD is, if you started at a different point, you might end up at a different local minima. The definition of gradient descent for any arbitrary equation is:

For simplicity, let us simplify our solver to minimize over just one coefficient $J(\theta_{1})$. Now strictly speaking, this is a ordinary differential equation, not partial. The equation now becomes 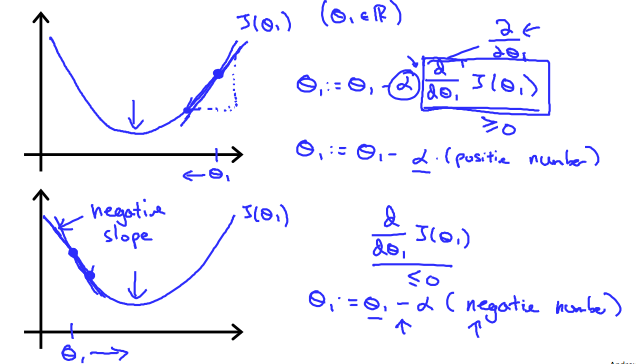 The $\frac{d}{d\theta_{1}} J(\theta_{1})$ term is the derivative and gives the slope of the tangent at each point. The direction of the slope changes depending on the position on the curve and will lead the iteration to local minima.

The learning rate $\alpha$ is multiplied by the slope / derivative term. A larger $\alpha$ will lead to an aggressive iteration which may overshoot the minima or even lead to run away divergence. A very small or conservative $\alpha$ will slow down the convergence or might settle for minor minimums as local minima. 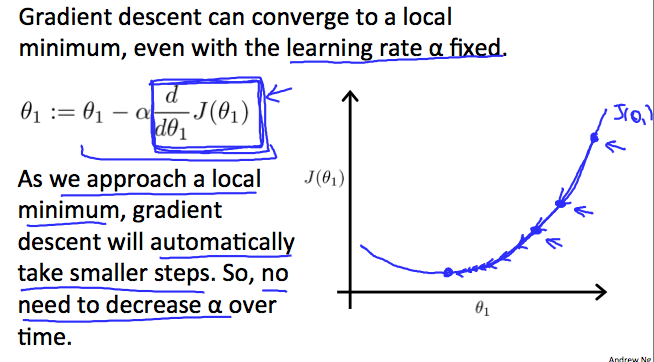 Further, as we approach the local minima, the slope decreases. Thus even for a fixed $\alpha$, the rate of change will slow down in general, leading to a safe landing at minima. The slope at local minima is 0. Thus, once reached, the second term of the equation (right of the minus sign) turns to 0 and the iteration as converged.

The loss function $J(\theta_{0}, \theta_{1})$ can be expanded out with actual loss function equation from earlier. Thus now the differential equations become:

This process of using the full training sample for calculating the GD is called batch gradient descent. In the case of linear regression, the shape of the loss function is a convex function which looks like a bowl. There is only a global minima and no local minimas.