Big data is the talk of the town. What is it? What are the components? Let us demystify some of these jargons 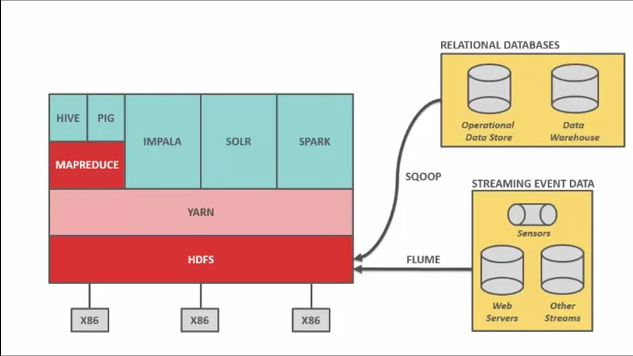 HDFS is written in Java and sits on top of a standard OS of that machine. HDFS is great only if your data files are quite large, like 1GB and not if they are tiny - like 1kb.

Writing data into HDFS is interesting. All datasets are to be replicated 3 times. You talk to the co-ordinator node which tells which nodes to write / read data from. You write to the first node which tells you where to put the other 2 replicas. This format of processing is called pipeline processing in HDFS.

Data Locality is important in HDFS for speed. Since data is replicated 3 times, the coordinator can instruct different processing operations to be performed on different nodes. Priority is given to that node which has the max data blocks required for that data operation, since working on data in that node is much faster than reading data from network.

Allows computation across Hadoop nodes. It uses a job tracker on main node and task trackers on all slave nodes. Task trackers allocate CPU and memory and monitor the tasks.

Developed by Google in 2004 which led to development of Hadoop. MapReduce was hard to master and use, requires lot of Java code. Building complex jobs is very hard.

Yarn manages compute resources and sits on top of HDFS. Yarn stands for Yet Another Resource Manager.

SQOOP = SQL + HadOOP for ETL (Extract, Transform, Load), get data from SQL like tables into Hadoop

To get streaming data into Hadoop

Accessing data from HDFS is via a .java program and not a sql like in a RDBMS. A number of flavors of Hadoop came out that answered this limit. For instance, Facebook created Hive which allowed you to write standard sql which will be converted to java for Hadoop. Hive reduces 1000s of lines of Java into SQL, rather the reverse.

Same as HIVE, but higher level language and is anologous to PL/SQL.

Developed as Hive and Pig were not just as fast. So for low latency sql, Impala was created and it bypasses MapReduce as it communicates directly with HDFS

If you wan to Google (search) your Hadoop data. You can pipe SQOOP and FLUME into SOLR on the way into HDFS so it indexes on the fly for great search.

Apache open source framework that allows performing batch and real-time data processing on HDFS. It was built by learning the difficulties with MapReduce. It can be considered as a general purpose compute engine.

Integrates very well if Python, Scala, Java. New products like Spark Streaming is designed for developer ease of use.

Resilient Distributed Datasets representation of data in object format and allow computation on them. They contain data lineage. Transformations are what you do to RDD that result in creation of a new RDD. Actions is questions / searches on the RDD to get your answer.

Spark does all work as lazy evaluations and work on the data only when necessary. Further, data lineage allows them to rebuild data or RDD that is lost in the event of a fault.

A very early form of a distributed file system. It had a 3 time data replication. With more nodes, Google improved both their compute and storage power. It built MapReduce to work on this GFS.

After Google published their white paper on this, Hadoop was born out of a custom implementation of this.

Since there are numerous alternates, some companies bundle them and sell as their products with some additional value added components.